Everyone on Earth past the age of 2 probably has at least a casual acquaintance with the Moon. A bit beyond 2 years of age we learn that the Moon tags along during the Earth’s yearly orbit around the sun. Some folks become interested and eventually become stargazers, sometimes known as “back yard astronomers”, like me. A select few, unlike me, get well educated and become rich and/or famous

Be that as it may, let’s take a quick look at what I call the “Earth – Moon System”.

As some (most??) readers probably already know, there are many objects in addition to the Moon that share Earth’s orbital path around the Sun. To understand how that works we must look a little deeper into the Sun-Earth system, as illustrated in the graphic, below (borrowed from Wikipedia and NOT to scale). There are some interesting things and happenings there . . . 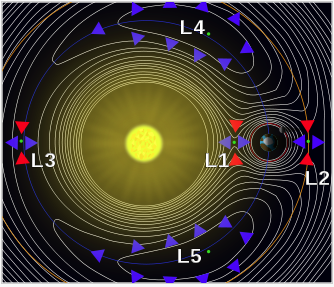  
An asteroid, or other massive body, can orbit the Lagrange Points (small blue dots) labeled L1, L2, L3, and L4. This is a bit odd because there is really nothing solid located at a Lagrange Point – a Lagrange Point is a confluence of gravity force from relatively nearby objects, in this illustration, where the gravity from the Sun and the Earth come together.

Yes, the gravity from the Moon is also involved, but that complicates things (and makes for a messy illustration)  so let’s ignore that, for now.

These Lagrange Points are relatively small Gravity Wells, sometimes called Gravity Dimples, in the fabric of Space-Time, as illustrated, below, which I have borrowed from Wikipedia.

Gravity wells or dimples, are a way to understand how gravity works without doing the math.

All we need to know in order to understand what causes Lagrange Points is that anything that has mass can create a depression in Space-Time and the “depression” is what causes what we call “gravity” to happen.

Here is an illustration (borrowed from Wikipedia) that (sort of) illustrates this concept . . . 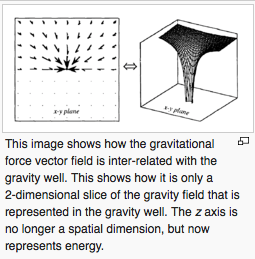 If an object is massive enough it creates a very deep Gravity Well that produces a “Black Hole”, but that’s a story for another day.

That’s quite enough cosmology for now – let’s get back to Trojans, and such.
Earth’s only Trojan, named 2010 TK7, is a 300-meter diameter Asteroid.

Notice in the illustration below that the objects are referred to Trojans (green), Hildas (red), and Greeks (also green) depending upon which Lagrange point they gather around. In order to clarify which Trojan or Trojans are being referenced, double -Naming, such as “Greek-Trojan” or “Hilda-Trojan” are used. 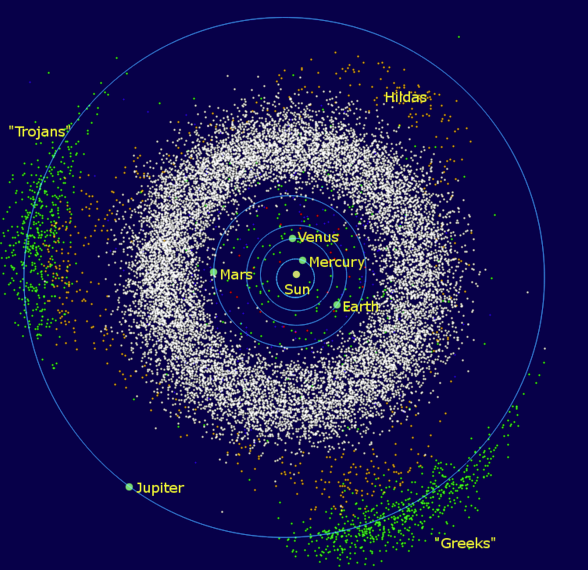 Note, also, the Asteroid Belt in white. At the scale of this drawing, Earth’s one Trojan is not visible.

One other note of interest – – it is quite good neighborly of Jupiter with its huge gravity well to capture all those Trojans, Greeks, and Hildas because some of them were probably headed toward Earth and could have done considerable damage when they collided with our home planet.

For a more detailed discussion (including the names) of about 150 of Jupiter’s Trojans, I suggest a visit to Wikipedia – it would require multiple pages to include all the information here on this blog entry.

2010 TK7 is shown below in the green circle near lower right-hand corner of the infrared photo, just below the brightest star in the photo 

There are a dozen or so additional objects in the Earth-Moon “family” and they have rather strange “orbits” as they follow or lead along Earth’s orbital path.

A horseshoe orbit is a complex orbital motion of a small orbiting body (such as an  asteroid) relative to a larger orbiting body (such as a planet). The orbital period of the smaller body is very nearly the same as for the larger body, and its path appears to have a horseshoe shape in a rotating reference frame as viewed from the larger object, as in the drawing of the Sun-Earth-Moon system shown below. 

The loop is not closed but will drift forward or backward slightly on each orbit, so that the point it circles will appear to move smoothly along the larger body’s orbit over a long period of time. When the object approaches the Earth closely at either end of its trajectory, its apparent direction changes. Over an entire cycle the center traces the outline of a horseshoe, with the larger body between the ‘horns’.

Asteroids in horseshoe orbits with respect to Earth include 54509 YORP, 2002 AA29, and 2010 SO16.
In closing, there are other types of Trojan orbits, one is called the “Tadpole” because it traces an outline resembling a tadpole. The blue triangles around L4 and L5 illustrate the outline of the Tadpole orbits. Another one is called a “Halo” orbit because it is less complicated (more “normal”) than the other types of orbits.

By the way, the James Web Space Telescope (JWST) scheduled to be launched in October 2018 ( if the U.S. Congress continues to fund it) will be placed in orbit around the Sun-Earth L2 Lagrange Point.

Retired 29 May 1987. Now do hobbies: blogging, ham radio, gardening, etc.
View all posts by w6bky →
This entry was posted in Miscellaneous Musings. Bookmark the permalink.